The City of Cottage Grove made a best guess master plan of 281 lots on 83 acres for the Mississippi Dunes, but in hindsight, it might have lacked vision. Due to constitutional protections and court precedents, however, it can’t stop the ongoing process.

Included in the draft Environmental Assessment Worksheet with the City’s best guesswork from November 5 is a plan dated August 18 and stamped by the logos for “Pulte Homes” and “Westwood Professional Services,” that—although sharing many similarities with the city’s plan version— isn’t quite the same. With a proposed 369 lots in the developer’s plans for housing on the former Mississippi Dunes golf course and adjacent property owned through a separate company by the same landowner as the golf course, the city’s best guess appears to have been off by some 88 total lots. Other differences in the developer’s plan versus that of the city include the developer’s plan listing 7.7 acres as “Senior Living” in an area that the city plan has tagged as “medium density,” while some green space is also allotted around certain lots in what appears to be a potential if limited use of Low Impact Development, or LID. With a city park of 6.8 acres plus an additional river buffer and park area of 25.3 acres (making 32.1 total acres before the 12-acres SNA addition), the developer’s plan extends from below the railroad tracks to just in front of the final descent to the river, and includes three stormwater ponding areas in addition to delineated wetlands. A public trail system would connect with an existing underpass to Grey Cloud Dunes SNA and thence to various streets in the development, along with a city park.

Also included in specifics for the developer’s proposed lot density as shown in the 106-page EAW report are a gross site area of 164 acres, delineated wetlands of 8.2 acres, major ROW (right of way) totaling 3.6 acres and related to a county road alignment, along with a net developable area of 120.1 acres, 15.5 acres of “Other Ponding and Open Space.” Per the developer’s plan, 130 lots would be 50 foot lots, while an additional 239 lots would be 60 foot. Lot size affects density projections and affects the site zoning. With an application approaching but not yet before the Council for its vote, city attorney Kori Land addressed the legal aspect of rezoning Mississippi Dunes.

“The Fifth Amendment does not allow government to take property without just compensation,” she said November 17, telling the Council members that not approving the rezoning application as requested by the developer in a bid to artificially depress the land value, would be unconstitutional. Under the Constitution, the City’s actions were governed by adherence to the previously determined Comprehensive Plan—which did not allow for deviation in this case.

“Please follow your rules,” she told the Council as she acknowledged that things would get potentially uncomfortable as the Mississippi Dunes plan continues to move forward. “But you are required to follow the process that is set out in front of you,” she went on, such that to not follow the processes as laid out “would be considered arbitrary and capricious by any court of law,” she said. “Arbitrary and capricious” in layman’s speak would mean that the city was discriminating amongst developers as to who and what it did or didn’t approve, which is illegal. Rules, Land told the Council, protected everybody.

“We have an application, we have things that are in motion already for the Mississippi Dunes property, and you have to follow the process,” Land told the Council. “And that’s what you’re doing.” Following Land’s speech many Council members expressed their conflicted feelings on the matter of Mississippi Dunes, but also statutory obligations and the fact that if they acted to disapprove it the matter would end up in court, where a loss by the City would mean costing more for taxpayers.

“That’s not what we’re here to do,” Steve Dennis said of breaking the law and obligations set forth by statute, as he likewise emphasized the importance of oaths and the obligations by those who undertook to make them.

Opening towards the end of November and continuing for 30 days, meanwhile, will be a chance for residents of Cottage Grove to let the City know their thoughts on the matter, with details to come on the city website at https://www.cottagegrovemn. gov.

Also in the meeting packet for the November 17 Council meeting, meanwhile, was a recommendation by Council member Steve Dennis for Evan Frazier to replace Tony Khambata as chair of the Plan Commission, following Khambata’s appointment to fill the vacancy left by former Council member LaRae Mills.

“It is with full confidence that I recommend the appointment of Evan Frazier as the Planning Commission Chair,” Dennis wrote in the recommendation contained in the consent agenda packet for November 17. “Mr. Frazier is being recommended to fill the Planning Commission Chair position left vacated when the City Council appointed Tony Khambata to the City Council on November 10, 2021, to fill the position left vacated by former Council member Mills.” Dennis goes on regarding Frazier’s qualifications and why he recommended him.

“During his tenure on the Planning Commission, Mr. Frazier has served in a professional manner and distinguished himself as a reasonable voice in supporting our City direction for responsible growth,” Dennis wrote, finishing with the recommendation that Frazier be appointed to the chair position. Frazier was among those who initially raised skeptical questions when the Plan Commission was asked to recommend expanding the TIF boundary to the municipal city limits, before that item passed the Commission. 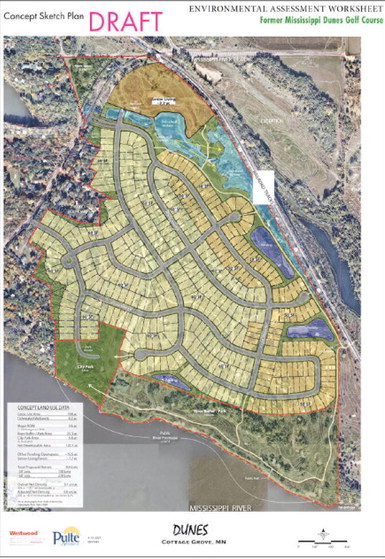 The Cottage Grove Police Department has a new recruit from Poland, and his sense of smell, is superb...

County to apply for trail funding from State Dept. of Transportation under Safe Routes To School Act

Meeting Thursday January 20 for its second board meeting of the month—not counting a January 6 w...

School Board due to consider three extended field trip requests

Meeting on Thursday, January 20 at 6:30 p.m., the ISD 833 School Board is due to consider three extended student field trips for students in the district, with each successive trip further from home, as defined in terms of Washington County. With a jazz band trip, golf team trip, and Spanish Club outing (to Costa Rica), here are some things that ISD 833 students could be looking forward to in mo...

BY JOHN McLOONE So much for a day off Sunday morning started with an executive decision. At my ...

BY BEA WESTERBERG It all starts with a little seed The program seems to be developing a pattern ...