ELLSWORTH – The Pierce County Sheriff's Office was honored at the 2021 National Police Collectors Show in Saint Louis, Mo. on Oct. 24 for an award-winning exhibit of department history, artifacts and memorabilia.

Retired Deputy Sheriff Bruce Von Haden of Spring Valley received the runner-up award for “Best Patch Display” at the international show and exhibit, which was attended by more than 500 law enforcement insignia collectors and historians from throughout the United States, Great Britain, France and Japan.

Von Haden is a dedicated collector and historian of Pierce County Sheriff's Office uniform insignia, such as cloth shoulder emblems and metal badges, as well as other departmental artifacts and memorabilia. His award-winning exhibit marked the first time a Pierce County collector has won a such a prestigious award at the law enforcement insignia collectors and historians annual convention. The show has been held each year since 1985.

Von Haden was honored for his virtually complete collection of shoulder emblems worn not only by Pierce County deputies but by other county municipal law enforcement agencies as well, such as Ellsworth, Prescott, River Falls and Spring Valley. His collection is considered the finest Pierce County collection in the USA.

Von Haden's interest in preserving Pierce County law enforcement history began not long after he joined the department full-time in 1989 after working as a part-time deputy for three years. During his 30-year career, he served as a dispatcher, jailer, patrol deputy, patrol sergeant and investigator. He served the Pierce County Emergency Response Unit for 19 years, including working as team leader and as a hostage negotiator.

The National Police Collectors Show affords an opportunity for law enforcement officers and historians to exhibit their collections, exchange information and focus national attention on the preservation of police-related history.

“This show is how we show the world that we truly are the 'Thin Blue Line,'” Von Haden said. 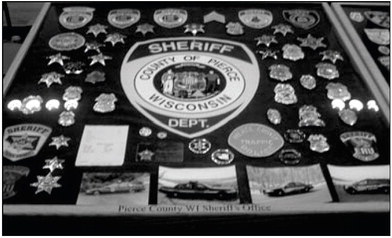